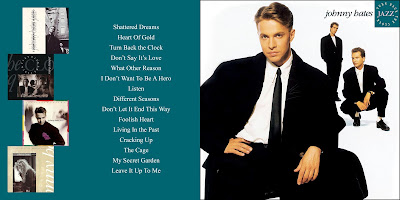 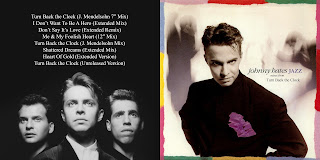 Yeah, I know, I teased Angstytimelord about this a little before I left.  Try as I might, I am a closet-fan of this album.  Around the time that I was big into Wang Chung and Duran's Big Thing and Sting and A-ha and GM's Faith album, I did have this one, too.  This wasn't my sister's album, this was me hiding in the closet with my Post Punk bands put away and I'm listening to this on my headphones.  At the time, I found it sheik to be a Post Punk/Punk who listened to NO and DM and Cure, and proud of it.  These other bands I kept on the back burner in a low profile, but didn't deny them.  JHJ, though, I completely denied, but secretly listened to them on an unmarked cassette.  What a coward.

I have often heard people lump these guys in the same category as Glass Tiger.  I firmly disagree.  Although their styles might be similar, JHJ is/was light years ahead in songwriting ability.  It's surprising to me, though, that I found the album tracks to be more of my favorites than the singles were.  As a whole, the entire album meshes well, sounds great, and is an EASY listen from beginning to end.

I didn't know and didn't research any of their mixes or b-sides until it came time for me to do this disc.  I had to hunt them down and rip them from Youtube, so the sound quality isn't 100%.  It's still good, though, and listen-able.  The mixes were tricky to identify, though, as some of them are labelled differently on the official singles, even though they are the same, and then there was even more variation in the labelling once they got on Youtube.  There are a lot of "New Mix" "Remix" "New Version" for the same mix across the board.  I originally had almost two discs worth of mixes, and narrowed it down to less than one.

It's good to be back, but I still have a variety of other projects that I'm working on, so I will try to stay on target.  I have finished posts ready through mid-July, so I still have a buffer in place.  I just want to work on my other stuff, too.  I'll see you tomorrow, though, with another "Welcome Back" post....

Email ThisBlogThis!Share to TwitterShare to FacebookShare to Pinterest
Labels: 1988, Johnny Hates Jazz, Turn Back the Clock