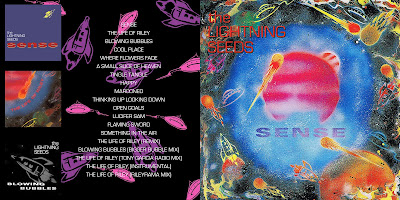 Although this is probably either my first or second favorite Lightning Seeds album, I've always hated this cover art.  It's hard for me to even discuss this album without first pointing out my distaste of this amateurish, high-school quality, lack of proper layout cover.  Even the fonts suck.  I quite honestly made artwork of this caliber in junior high school.  It's obviously air-brushed with a traditional, old-school style with an actual brush.  You can tell by the splattering and the masking and crummy looking clouds.  The layout is abominable, with a single focal point exactly in the center of the cover, and a boring arial-black sans serif font for SENSE.  It's not even that creative.  I seriously SERIOUSLY made better work than this in junior high, about 13 or 14 years old.  Absolute junk.

NOW, I got that out of my system.

This is definitely a brilliant follow-up to Cloudcuckooland with a host of fantastic pop hooks and flares, and classic lyrics and melodies.  His whiny voice that sort of annoyed me on the first album, seems right at home on this one.  This was in my top 5 albums from 1992, right up there with Shamen's Boss Drum, Cure's Wish, and the Other Two.  Even though I was knee-deep in Techno at that time, I still had plenty of listening for other bands, and this album outlived Techno by far.

Even though the singles filled the front of the album, I always thought the back half was the better of the "two sides".  There was a feeling of cohesiveness and a common thread that pulled them together.  I would list my favorite tracks from them, but looking at the last five, I really can't decide.  Maybe Marooned is the best?  Not sure.  I can't imagine listening to one of the tracks without listening to all of them.

I added the 4 b-sides after the album tracks, and listening to them, they are as good as the album proper, and a unfortunate thing that they weren't originally on the album.  Maybe Lucifer Sam is a little different, but as a whole, the b-sides are nearly indistinguishable from the rest of the album.  The remixes aren't really that good, but I have to add them to this set to make it complete and fill the disk.  Plus, you all might like them more than me.