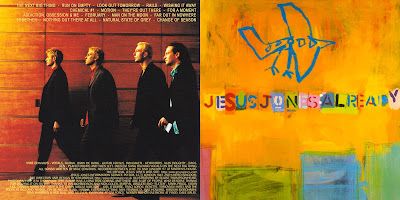 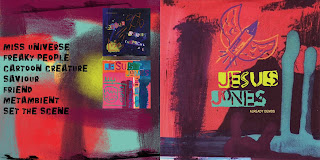 I'm going out of town tomorrow, so I thought I'd do tomorrow's post today, just to get it out of the way.

I look at Jesus Jones now, and I really do feel sorry for them.  Mike Edwards is truly a talented songwriter - truly.  He has passion and creativity and he loves what he's doing.  Sad thing about it, is that the entertainment industry is fickle, and in the case of the nineties, it was shifting dramatically all over the place.  JJ was in the right place at the right time and they were on top of the world.  I read several interviews back in the day in Details magazine and Rolling Stone about these guys and they made Mike out like he was a god or something.  He had to feel like he was on top and nothing was going to stop him.

Now, a lot of people consider them to be one-hit wonders - which has always bewildered me as they had a hell of a lot more than one hit.  I watch some videos of them playing on Youtube, like this one---

and there they are, stuck on this little micro-stage, playing to a handful of people.  Mind you, they could do something about their stage presence (that keyboardist is a dork), but they are having fun, could have been huge, and I get the feeling that there is a lot of remorse of what might have been.

Already was a breath of fresh air to me, at the time, as we were in the middle of the psuedo-grunge American "Alt Rock" scene, and then the Electronica thing before it exploded into a zillion different sub-genres.  Here we find a new, unassuming Jesus Jones album.  Powerful, soulful and solid, the album really stood out to me as something ELSE.  Not the same old crap that I heard every day on the radio (and in some cases my CD player.)  It had potential and maturity and direction.  It had everything needed to be an album to put them over the top.  Except, it didn't have the publicity and marketing, it didn't have the support of the industry, and the hardcore fans like myself couldn't make a difference no matter how hard we tried.  I think there was two of us in my town.  Hell, the album wasn't even officially released in the states.

They've already (no pun intended) released a deluxe version of Already with 3 or 4 discs of material.  Some live stuff, alternate takes, demos of the existing tracks and whatnot.  I just pulled the album, the b-sides and the demos of songs that weren't on the album.  Now, you have at least one version, if not the official version, of every track recorded during those sessions.  All of them are good, no matter if it's a b-side, demo or album track.

I'll be gone this weekend, but my next scheduled post wasn't going to be until Tuesday anyway.  I'll be back then, with a post from their "brother" band from the early 90s who was also called a one-hit wonder.  I'll make a deluxe edition of the album of your choice if you can be the first person to correctly name the "brother band" I'm talking about before I post it on Tuesday.