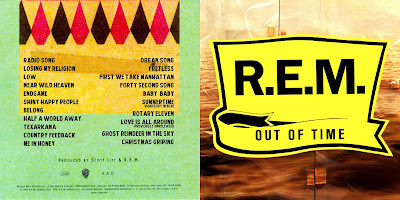 One of the most anticipated albums, the follow-up to Green, Out Of Time really introduced REM to mainstream America, and probably the world.  Of course, Green was a hit and a great intro in it's own right, but Out Of Time was the one that shot them to super-stardom.  I was in my first year in college, and giddy as a school girl when I picked this one up.  Green had been one of my favorite albums ever (still in my top 100) so my hopes for this one were huge.

All in all, it's a great album.  It's not SUPER, just great.  I could lose Radio Song and Low, and although I like Kate, I could've done without Shiny Happy People (although I'm a sucker for pop-hooks, this one was too easy and overplayed.)  My favorite tracks of the album were Near Wild Heaven and Half A World Away.  Great stuff.  Losing My Religion was a great song, not one of my favorites.  Had a great melody and very strong lyrics and the video was awesome.  But it was way overplayed and it grew tiring.  I still like it, just heard it way too many times.  (I said great in this period four times if you don't count this one...)

All the b-sides and fan club tracks but I left off the remixes.  They would've pushed the CD limit and none of them were any good anyway.  As for the cover, just a straight out duplicate of the original.  The font I used, though, looks a little screwy.  The kerning in the type is off and makes the spacing a little awkward.

Thanks, all for your messages on Friday.  My boss knows, and he wasn't upset.  He's letting me work my final two weeks (for now) and the other sales people have already started cannibalizing my accounts.  That's fine, who cares.  I'm OUT!  Only troubling point is that I've already turned in my notice and my new job still hasn't gotten my piss-test back yet.  I KNOW that it's clean, but I always like to have everything squared before I make a move.  Always afraid of the "what if" scenario.

Lastly, I'm going to do some re-upping right now, in case you needed something.  If I miss anything, let me know.

Email ThisBlogThis!Share to TwitterShare to FacebookShare to Pinterest
Labels: 1991, Out Of Time, REM