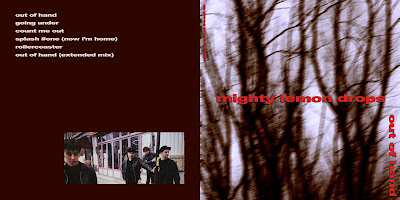 Although my "EP" differs from the original, I must say that I got this on cassette back in the early 90s, after hearing the extended mix of Out Of Hand on the Just Say Yes Volume Two compilation from Sire.  Totally fell in love with it and became an EP of esteem in my collection.

Then I started listening to some of their other material....  Too bad they wrote all of their good songs for this EP, is what I think.  I look at the many albums they recorded and released, and I can't find a single one that I can say is good, to me.  What a sad thing.

This is definite Post Punk song writing.  Reminds me a lot of early Ocean Blue, and I also get a hint of the Bunnymen in there and a dash of jangle.  I changed the cover, using different trees than the original, but kept the same theme. I pulled out the live tracks, (which I've said previously I detest individual live tracks rather than a full show) and added the extended mix of Out Of Hand.  It's a good little one-off set to play between your discography binge-playing of other bands.

Email ThisBlogThis!Share to TwitterShare to FacebookShare to Pinterest
Labels: 1987, Mighty Lemon Drops, Out Of Hand EP