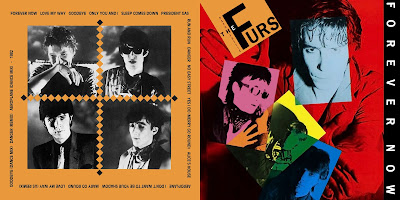 Although not my favorite Furs album, Forever Now was their third US release, and the one that showed a major shift in personnel and also sound (according to Wikipedia).  There are a lot of great songs on here, but this was one that was initially purchased by me on vinyl back in the mid-90s while raiding a used record store.  It was a big one in the Westport neighborhood in Kansas City.  I can't remember the name of the store, it's since gone out of business....  So, although a fantastic 80s Post Punk masterpiece, all I can think about in relation is listening to this as I was also listening to Techno, Grunge and Britrock.  So, no real nostalgia there to pull you back to your 80s days from me, unfortunately.

Even though the British release cover is good, I prefer the US release cover.  Probably because it was my first view of the album.  I didn't see the British version until I picked up the 20th anniversary edition on CD.  And, as with too many other remaster deluxe versions, I had to add remixes to the album as they were left off.  I think if they're even going to bother with making these deluxe versions, they need to also include any additional mixes and remixes, even if to just flesh out the rest of the CD.  I mean, this one had live versions of some of the songs, which I think is dumb to begin with (so I pulled them out of the track listing).  Why would you want to listen to ONE live song?  Or two or three that fade in the beginning and fade out at the end?  If you're going to release live tracks, at least make it a live disc so it's like a whole show...

I'm still working on my compilation week sets.  This has been a tough one, even harder than the Techno one (that no one liked.)  I'm on my last compilation, and it's a Chill Out set.  But, my Chill Out tunes are so diverse, I can't get a good mix.  The segues and styles contrast a little to much, and one disc also is a little too limiting.  It'll end up being a double disc set, but that also makes it twice as hard for track selection.  I have seven different compilations spread over six days.  Three of them are double disc, and only three of them are compilations I had already made.  And ALL of the covers are new.  So, it's been a tough one.  Listen to me whine.  I still love it.