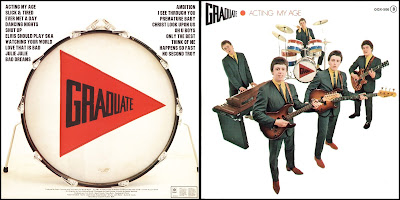 Alright, all who like Tears For Fears, raise your hands....  Great!  I love to see that many hands in the air!

I didn't find out about Graduate until I discovered Discogs.  Even then, I didn't hear the album until about 2005 or 2006.  It's funny listening to the album, knowing they were just kids at the time, and hearing Roland's deep voice, even then, singing out loud and strong.

Listening to this one, you can hear Roland's definitive style already in full bloom, sounding a lot like TFF first album, with a Power Pop/Ska edge.  I've always wondered, though, why they drifted from that specific look and sound, and shifted to their obviously more well known personas.  Was it because the niche for Power Pop/Ska was limited and very small, and only lasted until the late 70s/early 80s before fading to obscurity?  That would be the obvious answer.  Was it a commercial switch to do so, or was it an artistic change?  That is what I want to know, more.

If your a fan of TFF, than consider this TFF lite, minus the New Wave and add the Power Pop & Ska.  If you are a Power Pop or Ska fan, than be prepared to hear those styles of music played in a whole new way, packed with a lot of pop hooks and talent.  This is a MUST HAVE for any true TFF fan.

As for my version, it's not my version.  This is as it was, released on CD in 2001 in the UK.  But, long out of print and hard to come by, I felt it was necessary to bring it out for all to see.  The only problem is that it's missing their very first single, Mad One with the b-side Somebody Put Out The Fire.  I should have included it, but time constraints on the "disc" prohibited me from doing that.  Also, it sounds like total shit.  Really really really.  I've included it as an additional upload, and you can include it in your "one of 7-inch records" folder that you might have, as I do.

The shitty Mad One single
Posted by Unknown at 4:02 PM

Email ThisBlogThis!Share to TwitterShare to FacebookShare to Pinterest
Labels: 1980, Acting My Age, Graduate, Tears For Fears