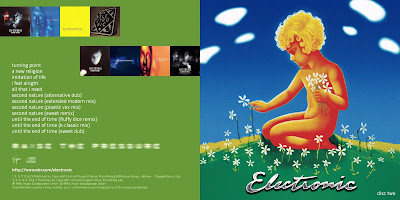 When Electronic first released Raise the Pressure, I will admit I was a little disappointed.  After their stellar "debut" in 1991, this one lacked the creativity, diversity and spontaneity the first one had.  It came out at the same time as PSB's Bilingual release, and after Very, I felt the same about that one as well.  I don't know if it was the time period that they came out, or if they had grown tired, or if I was even expecting too much. These two released lacked the fire of their predecessors had.

As with Bilingual, I listened to this one repeatedly.  They both were still in constant rotation at home and in the car.  And, over time, I learned to love them and hear the creative nuances and finesse that only these two groups could bring.  Electronic's album really hit home with me, not in the singles, but in the album tracks and b-sides.  That was where you could really hear the expertise that both Sumner and Marr had.  The magic that the two of them shared was like no other.  Honestly, though, I would have preferred a little more on Johnny's guitar, but that's beside the point.  And, as for Bernard, his singing was exceptional, as always.

There were too many b-sides and non-album tracks to make one disc with them and the album, and a second disc with just the remixes.  So, here you have DISC 2.  Load this puppy right behind the album, and you'll be set.  I also wanted to try and use the For You single sleeve as the cover of this one, but none of the pics I had of them were clear enough, and if I tried to fix it, you could totally tell and it looked stupid.  Still, eventually, I would like to make a font of that typeface on the cover (unless someone out there already has it and would like to share with me) because it's fabulous, and I can think of a dozen projects I'd like to use it on.

Tomorrow is the first day of Compilation Week, we'll see you then...