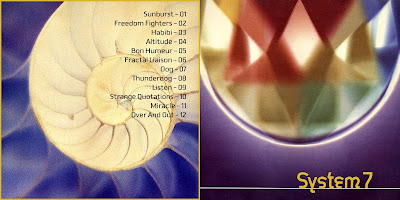 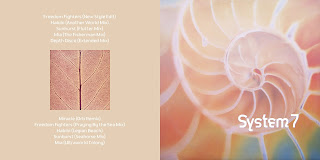 I really don't know how or why, but System 7's first release, the original British version, was my first Techno album.  I'm pretty sure I purchased it the same time I got Shamen's En-Tact album.  Two distinctly different albums, but showcasing the diversity of the genre and excellence in their interpretations.

I bought it on the recommendation of a record store clerk from Pickles Records in Nebraska.  They had received the disc already opened, and he played a song or two on the store system for me to hear.  The quality of the music, plus the fact that it was an import (I love to have things that are hard to come by) really influenced me to pick it up.  I recommend you to do the same.

The great thing about this album is that it's not one droning Techno track after another.  There is some Ambient, some Pop, some Techno, some guitarwork, and a lot of synthetic noodling that make it a listen that never gets tiring.  Plus, it's not the trendy cliched sound that is easily dated.  This is definitely written in a classic universal style that can easily appeal to music lovers of any age group or decade.

This album wasn't immediately released in the US, I think it took another year or so before they were able to do that, and they had to change their name when they did.  The track listings were different, and there were different mixes on there as well.  I took all of the different tracks and put them as closely back to the original UK release, while adding the new tracks from the US one.  The second disc is almost all of the mixes, I think.  There is a great one by The Orb, a band in its newly formed stages still trying to find themselves in the Post-House dance music world.

I can guarantee you will enjoy the main album disc thoroughly.  It's a great audio meal that's will leave you feeling full and happily satisfied.

Email ThisBlogThis!Share to TwitterShare to FacebookShare to Pinterest
Labels: 1991, 777, System 7