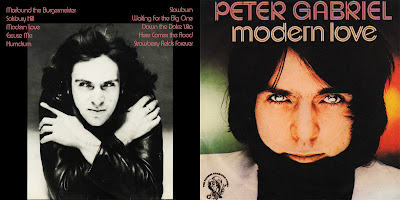 Even though the cover of PG's first album is cool, I wanted to use some of the beautiful images from his singles for this cover.  And, in an attempt to add a title for his first album, I used the single Modern Love as the title for the entire album.  Call me a heretic, but I think it works.

Being a 16-year-old boy, in love with So, I wanted to hear other PG albums.  I thought, naively, that starting with his first album might be the best.  Boy, was I shocked.  At the time, I wasn't a huge fan of Prog and 70s Rock.  I was wondering upon listening to the first album if a mistake had been made, as this didn't sound like PG at all to me. I tried really hard to listen to and like this album, but for the life of me, I couldn't.

Years pass, and my taste in music developed and shifted and I picked this one up again.  By that time, I had fallen in love with Genesis' tLLDOB epic, so I thought that a re-evaluation of the first PG album was in order.  Again, I tried to like the album, but, again, I didn't.  It took time, revisiting again and again, along with his other early albums, and I eventually came around and now I truly love the work that he put into it.  It's definitely an acquired taste.

It should be expected, especially from PG, that a transition from his Prog beginning would take time and experimentation.  I feel that starting with this album, he wanted to make music that he liked to make, that would eventually be a universal sound that expressed his art and mind, and also tried to avoid the trappings of being classified into one genre or another.  Honestly, listening to him from his early roots through his sound today, he has run the gamut of sound and art.  Sort of like his contemporaries in Sting, Phil Collins and U2.  Standing in one place too long creates stagnation and irrelevancy.

This is still a pleasant ride, as long as you have an ear for Prog as well as Rock and the rest of PG's work.  If at first it doesn't succeed, try and try again.