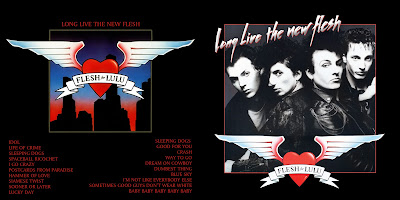 Back on June 10th I threw out a pop quiz with the promise of a choice for an extended album.  Mr Stevo answered correctly, so I promised to make a set for him.  Now, a month and a half later, I finally have his post....

To be honest, I know next to nothing about Flesh For Lulu.  Aside from their soundtrack hit I Go Crazy, I haven't heard much by them. Even their Wikipedia page doesn't really go into too much detail, other than they were a band struggling to get recognized, but always falling short.  Too bad.  Because, from what I heard as I was compiling these tracks, they are really a noteworthy band that I need to delve further into.

In 2003 they released a remaster of this album with 4 extra tracks on it.  As you can see, I added a hell of a lot more than that.  Partly because I added their Idol EP, which was released the year before LLtNF, so that added an additional four tracks, plus a few other odds and ends.

I've also added a "maxi-single" of I Go Crazy because I thought it would be fun, and they had a bunch of mixes, too.  I will say this is the one song of theirs that I've listened to a thousand times, because I find it's pophook to be spectacular.  I love it.  (Plus, as a child of the 80s, how could you not love any song featured in a John Hughes movie?)

Anyway, I hope I've given you something special, Stevo.  Let me know if it meets your standards.. 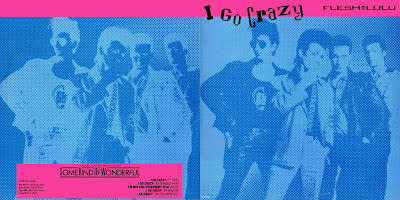 PS - Stay tuned for quite possibly my worst post ever on Friday.  I just looked at it and I'm wondering what the hell I was thinking...
Posted by Unknown at 4:25 PM