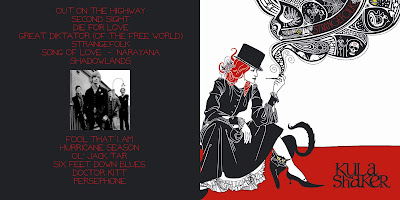 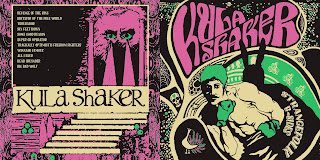 I liked their first album, K, but I was overjoyed, mesmerized and in love with their sophomore album PP&A album in 1999.  Probably my favorite album that year.  I was greatly disappointed when they went their separate ways after that, and I was not really impressed with Crispian Mills follow-up band The Jeevas.

So, when word got out that they were back together in 2006 recording their next album, Strangefolk, for release in 2007, I waited with bated breath, hoping to God that they returned to form to bring a truly extraordinary album.  Needless to say, it was not PP&A.

But, it is still Kula Shaker, and it is still a continuation of the mystical and magical sound that they started with.  Many of the songs carry the same qualities of their previous albums, and there is also sound of growth and the wisdom of maturity throughout.  They showed themselves to be a new yet older band than they were previously.  Crispian's lyrics and melodies still carried that same youthful approach, albeit a bit weird and bizarre, but you could still tell that life had changed him, whether he realized it or not.

The album is a solid rocker and definitely a keeper.  It still carries that album-oriented sound, even as the singles stand out in their pop-hook purity.  The orchestration and harmonious instrumentation is at near perfection, and worthy of repeat listening and analyzation.  They've earned their right as leaders in the Britrock, Psychedelic and Rock genres, a band to be recognized and emulated.

They progressively get better on their next two albums, but this one stands as a much needed reunion of their sound and story.  Enjoy what we've got here.

Sorry for the delay. Still recovering. (Just call me Captain Melodrama)
Posted by Unknown at 7:33 AM