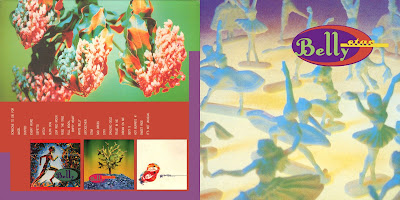 Back in the day, I did dabble some in the "grunge" thing.  I preferred to call the music that I liked "College Rock".  I was in college, it was Rock, and I would not admit to listening to grunge (although I still have some Nirvana and Soundgarden in my collection (no Pearl Jam!)).

To be completely clear, though, I liked the Pixies in the late 80s and had a lot of their music.  Obviously, Bossanova stands out as one of my favorite albums, probably in my top 200 (maybe).  So, with Frank going solo, and the Breeders taking shape, it was only natural for me to play into Kristen Hersh, Throwing Muses, Tanya Donelly, and of course, Belly.

I used to think this was a great album.  It was fun, catchy, and I loved the vocals.  Mind you, Curve and Lush were big with me at that time, too, so I was obviously drawn to those female vocals.  For the time period, though, the Breeders dominated my likes for this particular genre comparison, but Belly was a close second.

But, Belly is still interesting to listen to every once in a while.  It brings back memories for me of simpler times in my life, when things were just starting for me and my freedoms were being fully explored.  For others who are new to them, I'm sure that it would be an interesting listen, and a definite niche for your repertoire. The pop songs are still pop songs, and they are still rather good, even though dated.

It would be interesting to see Belly get back together for a new set of tunes, just to see if they could do anything worthwhile or relevant.  Or, better yet, maybe not.  Whatever.