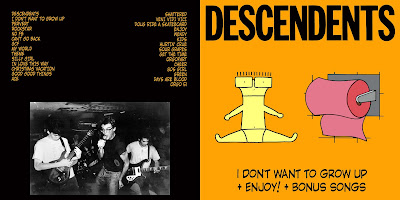 I'm posting this one a day early, as I have to go back on the road tomorrow and I won't be back until Thursday night.  Work isn't so bad, I think I'm enjoying it.  But, time away from the family is never good in my book.  I'll miss my boys.

These two albums were the Descendents in their prime.  IDWTGU is by far my favorite of the two, as every song is a pop masterpiece (to my ever-so-sensitive ears.)  But, Enjoy is great in it's own right, as well.  I just don't like it as much.

I first heard IDWTGU in the car on the way to school, one fall morning in Downers Grove, Illinois, a suburb of Chicago.  I was in the back seat of Carey's camaro, sitting to a skinhead with short, stubbly red hair fuzzing his scalp.  Sharon was in the front seat next to Carey, and we were driving over the commuter tracks next to the station on Main Street.  The Tivoli Theater was on my right, and I can't remember what was on my left.  The sun was coming out, and the air was crisp with a chill.  No clouds in the sky, and the leaves on the trees were brown.  Sharon turns around and begins singing along with In Love This Way, right at me, tossing her hair back and forth.  I had nothing for her, but it seemed rather pleasing to have that happen.  I felt one with the group, I felt some adoration to a degree, it made me blush.

I had a tape of a tape of a tape the first time I "got" this album, and I wore that sucker out.  I didn't actually buy the tape until my senior year, and then got the CD in about 1993.  By then, I had that album memorized forward and back.

Enjoy was another story.  I never had any real personal connection with it.  I simply got the tape about the same time I got the actual tape of IDWTGU, and listened to that in tandem with the other.  Sour Grapes, Cheer, 80s Girl and, of course, Wendy were among my favorites.  Although somewhat humorous, I never understood the necessity of the Orgofart track.  Was that how they wanted to be portrayed for the rest of forever?  Probably a precursor to Van.

I found some bootleg demos of some unreleased tracks that fell somewhere between the two albums.  They aren't too bad, but you can tell why they weren't ever used.  Some may say that there were other tracks out there that I didn't include.  Don't worry, I have them all.  There ARE some other tracks out there with different names, but if you listen to them, they are all the same as the ones I included in this set.  As for which names were the correct names, I don't know.....

Email ThisBlogThis!Share to TwitterShare to FacebookShare to Pinterest
Labels: 1985, 1986, Descendents, Enjoy, I Don't Want To Grow Up