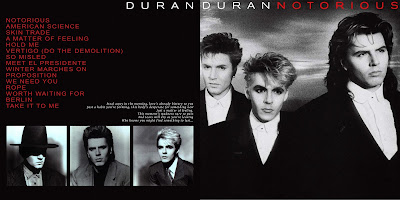 A little more than a year ago, I posted my best mixes from Duran2's Notorious album.  I had hoped to post this one shortly after.  But, here it is, 14 months later.  Better than never, I guess.

Nothing too personally spectacular about this one.  I was living in Chicago at the time, and was in my transition from Christian Rock and Hard Rock into Post Punk.  Duran2 was still at the top of my list, but I wasn't overwhelmingly drawn to them at the time.  This one came as a shock to me, as it was a complete departure from the Duran I was used to.  I was hoping that Arcadia + John Taylor would have come up with something a little more spectacular.  I didn't come to fully appreciate this album until well into the 90s.

On this disc, the track selection is a little tricky.  Of course, I have the regular album right up front, and the We Need You b-side shortly following.  But, there was a host of demos that could be included, but should they?

First, I have Rope and Berlin, which are definitely different songs than the rest of the album, and also are at a high recording quality, so they were a definite requirement.

Then, you have Anything For You and Take It To Me.  Both of them are unique melodies to the album sessions, so they are definitely additional songs.  But, their recording quality is for shit.  I played with them for a bit on my mixer, and couldn't get them to sound any better than what you hear in the Mp3s that I've included here.  Also, the Duran Wiki claims that Take It To Me is an instrumental.  Well, yeah, for the first 2 minutes I guess you could call it that, but then it opens into a chorus and then verses, so I don't know where they get this instrumental idea.  Do I have a version that is different than any other one out there?  Please, any Duran2 aficionados out there, please help me figure this one out!!!!!!

Lastly, there are a bunch of demos out there for this album.  But, they are all demos of existing tracks, they barely sound any different than the originals, and the recording quality is horrible.  I left these off.  So, anyone looking for One Of the Faithful, you will not find it here!

I really had a tough time finding a decent cover of this album on the internet.  This one that I've used really isn't that good, and I could probably update it if anyone has a better scan of it.  Just a thought.  I do like Simon's hat from the pics on the back.  I think that he might be the only person able to pull that one off, and he may not have pulled it off either.  Matter of opinion, I guess.