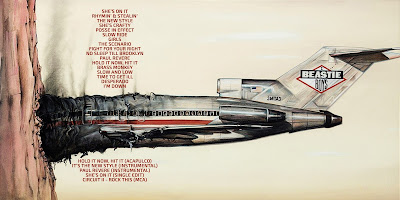 I truly have to admit that I didn't get into this album enough to actually purchase it until after I moved from Chicago to Nebraska.  In Chicago, with such a wide variety of styles and cultures, I was able to explore many different genres of music unfettered and choose the ones that I liked most, and find like-minded people with whom to associate.  That's why I settled in firmly to Post Punk.  But, once I moved to Nebraska in 1988, I was faced with a dramatically different scenario.  In Nebraska in the late 80s you were only allowed to listen to four different genres of music - Classic Rock, Hair bands/Glam Rock, Country or Rap.  That was it.  If you listened to anything else, you were ostracized and sent to the wood shed.  There was no tolerance or yielding at all.  Those very few that I knew who liked the music that I did kept it very hush-hush, like we were living in Nazi Germany hiding from the SS.

So, if I went out with the guys in Nebraska to cruise the local strip, I was forced to listen to these genres repeatedly.  Now, I don't have a problem with any of those genres...  well, yes, I do.  I hate Rap and Country.  So, it wasn't all that fun.

When one of the guys put this album on, I rolled my eyes and tolerated it silently, as I didn't want to rock the boat.  I was new in town, and I was trying to find new friends, and the last thing I wanted to do was be overbearing about what music we listened to, especially when all the rest of the guys loved it.

Over the course of the next year, year and a half, I heard this album about 25-30 times.  And it grew on me.  Really grew.  I started to truly enjoy it, despite it's sexist overtones and drug references.  Not that I condoned that sort of talk or behavior (even though today's Rap music - dominated by truly liberal or left-thinking people - is chock full of sexism and drug reference.  They treat women like dogs and exploit them horrendously.  I don't know why Democrats/Leftists/Liberals tolerate it.  Heaven's to Betsy if I talk about my faith in Jesus it's a mortal sin)

This album really sees the boys starting off at their best and at their worst simultaneously.  They are raw, inexperienced and performing without thought or consideration.  They were all about the parties and the girls and the Brass Monkey.

But, this album opened up a new aspect of music that previously had been relegated to niche stations and not at all mainstream.  It explored the newly developing Rap genre in ways that hadn't been done so far.  And I feel it led to a different, more substantial take on the controversial genre.

From here on out, the Boys would only get better.  Each album progressively found them breaking new territory and sound.  It's just hard to believe they started like this.

I added their first mainstream single, some bonus cuts, and all of the remixes (I think).  And it still comes in under 80 minutes!  One disc!

Last but not least, this is one of my favorite and most iconic album covers that I know of.  Even when I didn't care for these guys, I still loved the cover and it was instantly recognizable.  It's difficult to find a good scan of it on the internet, though.  Hopefully this one meets your standards.

SO, it's Friday night.  Load this on your music format of choice and go out for a drive shortly after sunset.  Turn it up, and have a little fun like you did when you were young.....

This last week has been a week from hell for me.  I had my wife's car break down in Oklahoma City, my car got hit in OKC while I was there trying to help my wife (completely ripped off the back bumper) and the driver speeds off before the cops can get there.  Then, when we finally get back home, two days later, I find that my dog's health had declined so much that we had to take her in to get put down.  And the washer broke.  I mean, my wife still is out of work, so we are operating on half of an income, and we have to dump almost 2K in four days on shit that we weren't expecting.  What the hell am I supposed to do?!  Fortunately, we both have families that are always there to help, and they gave us some assistance, but it didn't cover everything.  So, we are still in the red and trying to find a way to make it back up.  Anyone got an extra 10 large laying around, feel free to send it my way....
Posted by Unknown at 4:09 PM