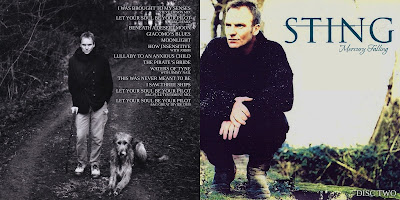 My best friend got Sting's Mercury Falling as a Christmas gift for my wife and I on our first Christmas.  My wife and I had been married about 6 months, and he was still struggling through medical school, so he was pretty much broke.  We appreciated that he got this for us.

Unfortunately, this was probably my least favorite Sting album for a long, long time.  I was very disappointed when it came out, after his three previous gems.  To me, this was adult contemporary elevator music.  And, in 1996, the music scene was going wild with Electronica, Britrock, American Alternative, and I'm sure some other genres that I didn't care too much about.  All I'm saying is that the music choices at that time were broad and all extremely good, Especially for someone in their mid to late 20s.  So, to decide to listen to this....  well, it wasn't high up on my list.

His Brand New Day album really changed things for him, and for me, and my wife and I saw him the summer of 2000 for that glorious tour.  The best show we saw that summer, beating out both Duran2 and Cure.  In fact, sweaty Simon and Fat Bob could hold a torch to him.  (And, Simon really was sweating through his t-shirt, leaving dark sweat marks in his pits and on his belly.  Gross.)

Having changed my thoughts on Sting after Brand New Day, I went back and gave Mercury Falling another shot.  Yes, the album isn't the most exciting one out there.  But, it is sincere, well-written, performed gracefully and succinctly, and showed Sting's growth and maturity.  The song hooks were subtle yet lasting, the mood was one of happiness and sadness, but ultimately human.

I was going to do the original album with the extra tracks, but it just worked out better to do everything BUT the album, so a disc two to be precise.  Just line this disc up beside/behind the original, and now you have everything.

Yes, this may not have been one of Sting's best ones.  But, it's still better than most out there, and still a necessity for any Sting collection.  He's not just Fields of Gold....