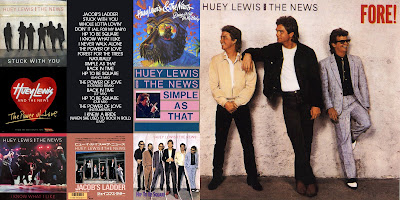 So, the third album I ever got was Sports by HL&tN.  I got it for my 14th birthday, because I sorta liked it, and my dad liked and approved of it, so we were all good with it.  Mind you, had I REALLY had a choice in it, I probably wouldn't have gotten it.  But, you take what you can when you have controlling parents.  But, I ended up loving the album.  It brings back so much of my youth whenever I listen to it.  Pure Rock and Roll.

When HL&tN released Fore!, I was rather interested, but that was when my parents had put the kibosh on secular music, and I was wading through Petra and Steve Taylor and Servant.  The secular music was hidden and discreet, and with limited funds, I couldn't afford much.  Especially when I was spending most of it on comic books (I obviously was a geek.)  I saw the videos, heard the singles, saw Back To the Future, and that was my extent with Fore!

Over the years I was able to come back around to HL&tN and Fore!  Another nostalgic album, it takes me back to simpler times, and the times in the eighties when the economy was good, youth was adventurous, and I was loving and living Chicago to the fullest.

At times I sometimes feel as if HL&tN is too American sounding, if you know what I mean.  But Huey just has a way with melodies and delivery that truly expresses his feelings and shows a side of Americana that most people take for granted.  He truly comes across as a auto mechanic with a microphone.  A hard-working, rough and dirty man with passion and drive.  He's a guy that you could see living down on the blue-collar side of town with a small house, crummy yard in a run-down neighborhood.  The everyman.  And, he's happy.  He's got a positive outlook, and he's motivated.  He feels GOOD.  That's what this album feels like to me.

I know the cover looks better with all of them spread across the image, but I wanted to get the single sleeves in there, as they are diverse and entertaining.  So, you get the original front, and the patchwork back that I so love.  I also have said that I don't care for individual live tracks, but I took exception with I Knew The Bride, because it's really fucking good.