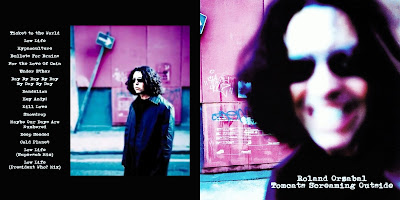 Huge expectations and desires when this one came out.  Why he chose to use his name rather than Tears For Fears is really beyond me, considering he'd been doing it that way for a decade.  I know that he and Curt were working together again, but another release of TfF would have gotten him a hell of a lot more attention than an album under his own name.

Excellent, excellent material on this one.  Absolutely fabulous.  One track after the next, we get classic Orzabal sound, with a modern flare and experimentation.  A little more electronic, drum & bass, and other styles current to this release.  Mind you, there are two songs on this one, though that I don't really care for, but for the sake of all of you, I won't tell you which ones, as I don't want to ruin it for anyone.  But, for the rest, all I can say is WOW.

It's unfortunate that it didn't get any attention or airplay.  But, when you have a name like Roland, and you are unknown to the general populace that doesn't normally pay attention much, it's bound to happen.  Wikipedia seems to blame it on 9/11, as it was released on that day, but I doubt that.  Maybe Wiki is just indirectly claiming it was cursed?  I don't know.  All I know is that it is one of Orzabal's best, and needs to be recognized for it.

Always hated the original cover, it just doesn't jive well for me.  Used the Lowlife single sleeve for this one, and seems more appropriate.

Dude, it's been one of those weeks.  Sorry for posting late, but yesterday sucked hard.  Plain and simple.