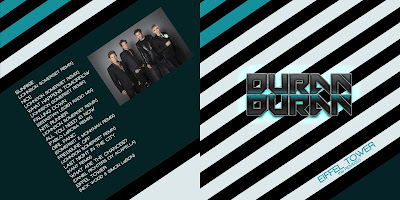 I end the year with my favorite band of all time.  Although I have been disappointed in about 70% of the material they've released since Arcadia and Powerstation, I still stand loyally at their side, forever a champion of their work regardless.....    Well, for the most part.

These last 12 years since they've reunited and released Astronaut, they have had quite a few great tracks.  Some of them weren't discovered as GREAT until they had been reworked by someone else.  A lot of times, a different perspective can help realize gems that had been previously merely adequate.  These are some re-interpretations of a few of those tracks that I have really taken a liking to.

Despite being music covered from the last decade, Johnson Somerset have been the best at mixing D2's singles into works of art.  I have most of their D2 mixes here, plus a few other great mixes by others.  They are all updated mixes to sound so fresh and current, you would think they were brand new songs.  Nothing dated here.  I don't generally like mixes like that, but these really REALLY work well.

I wrapped it up with Simon's newest track, Eiffel Tower.  It's a beauty.  Although his style is different than a D2 track, it's still a pleasure to listen to his voice.  This is a wonderful disc to close the year out...

SO, that's it!  No more posts this year!  Wow!  This has been an interesting and rewarding adventure for me so far.  I feel that I've made some great friends, and I'm happy to be able share my opinion on my favorite subject - music.  I want to thank you all for your support, and for coming religiously every day.  I know that at times I can be aggravating in the selections that I post, but you all have shown some great loyalty, and it is great to know that there are so many of you out there that like the same types of music I do.

I've got all of January and February scheduled out (but only covers through the 22nd of January.  I better get to work!) so you have me for at least that long.  I still have a lot of great ideas ahead, with still some older favorites left, but also newly discovered tunes from the 80s that I'm sure you will enjoy.  Stay with me, and we'll have a blast!


Thanks, again and we will see you in January!
HAPPY NEW YEAR!