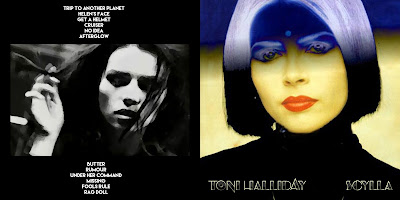 After the release of Curve's Cuckoo album in 1993, it appeared that Curve had decided to take a break.  In fact, I think most of us thought they had broken up.  As we all know, they returned in 1997 with Come Clean, but not before Toni worked on her own project called Scylla.

Scylla, a Greek character brought to life by Homer, Ovid and Keats, was best described, IMHO, as a beautiful nymph that is transformed into an ugly sea monster.  Click here for an excellent back history....  After learning more about the name, and applying it to the music that Toni performed in these tracks, I can't help but be mystified and awed by her and her work.

Toni worked on her Scylla project in 1994-95, but never released an album, and only released a single track which can be found on the Showgirls soundtrack.  There were also a couple live shows that happened in England back in 1995, as well.  I, personally, never even knew about the project at all until about 2006.  Finding these tracks that had been leaked on the internet back then, are near impossible to find now.  Best you can do is listen to them on Youtube.

These are all the tracks I've ever been able to find.  I don't know if any more exist.  If you are a true Toni fan, you'll love them.  If you only know her through Curve, you might be taken aback, as the tracks are rather course and heavy.  But, it's still true Halliday material that I really love.