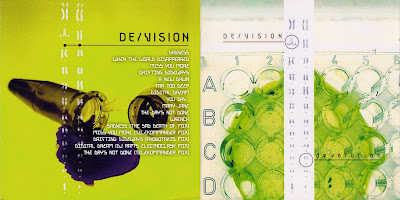 Somewhere in the late aughts, possibly around 07 or 08, I suddenly discovered an entirely new genre of music that I had never heard of before called Futurepop.  I would describe it as akin to Darkwave, or a hybrid of Industrial and Synthpop.  Where did this come from?  Suddenly, there are about 10 or 15 groups that I had never heard of before celebrating their tenth anniversary or releasing their sixth album...  Where had I been hiding?

De/Vision was one of those bands.  Next to VNV Nation and Covenant, De/Vision is one of the biggest Futurepop bands out there.  I personally like the other two bands a tad better, but De/Vision is nothing to sneer at.  They have a large discography stretching back to the early 90s, and enough Mode-like pop hooks to satisfy any DM fan.

Nothing enormously special about this album.  It is simply one of the many of their discography that I enjoy on a rainy day or late in the evening.  I pulled a few of the remixes from the album and a cover from one of their singles, and there you have it.