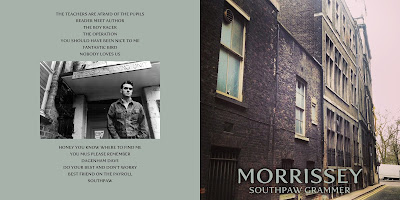 After becoming mainstream with Vauxhall, I was a tad nervous of this release.  I didn't want it to change his music and style as it did with New Order, Depeche Mode and Cure.  Well, I wasn't disappointed.  In fact, I think he purposefully avoided that with his elongated compositions in Teachers and Southpaw, on opposite ends of the albums.  To be honest, I never liked those particular tracks, as they seemed to drag on forever without point.

I got this album on cassette at Best Buy, back when they still sold cassettes and had a huge music department.  It never really stood out as an album for me, but I really liked Reader and Dave individually.  These two (and Boy Racer) would probably be on a Morrissey GH album, if I ever decided to make one.  Just another mid-90s album that got lost in the glut of "alternative" releases from that time.

This is the album and all of the B-Sides, and I think there's even a demo or unreleased in there, too.  I never cared for the original cover, so i made this one that looks pretty cool, and could even pass for a real Morrissey cover.