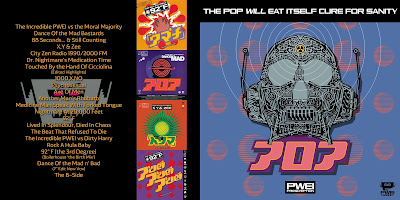 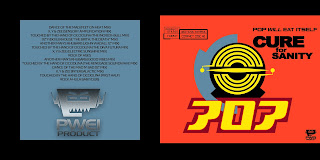 I'm not a HUGE fan of PWEI, but this album was my first exposure to them.  I bought the single to Dance Of the Mad based on the title and the awesome cover art.  Electronic/Techno was just barely starting out, and I was interested in finding more.  Also, being a big fan of Skinny Puppy and NIN (at the time), I thought it might be some new Industrial, too.  I didn't know.

Upon listening to it, I would now call it a hybrid of Techno/Industrial/Madchester/Hip Hop.  Wild.  For the most part, it's a great album.  But, I do get tired of the vocals before I can finish an album.  The vocals are SO annoying to me.  Musically, it is wonderful.  Hard but happy, manic but precise, cold and warm.  It's a walk down the street, confident and bold.

It's very dated and period, but it's fun and reminds me of when I was young and out with some friends who were more interested in Marky Mark, Boys II Men and Heavy D.  I tried to play some of this, and the finger on the eject button was fast as greased lightning.  "None of your weird shit." is all I ever heard.  Didn't bug me, though.  I was well aware that I was their musical superior.

I THINK this is everything.  Tough to say.  These guys (like BAD II and Beloved) are tough to sort all of the different tracks out.  Hope it's all there, but, if it's not, so what.  They're not THAT good....

Email ThisBlogThis!Share to TwitterShare to FacebookShare to Pinterest
Labels: 1990, Cure For Sanity, Pop Will Eat Itself, PWEI